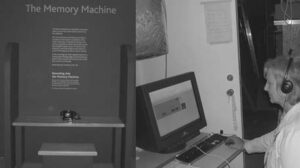 Where: The British Museum

The Memory Machine was a collaboration with Cathy Lane which, was first installed at Cybersonica 2002 and (significantly) reworked for the British Museum as part of the Museum of the Mind exhibition in 2003. The Memory Machine was an interactive sound installation which gallery visitors contributed to by recording their own memories of the British Museum, which were mixed, fragmented and transformed into an evolving musical soundscape. Visitors interacted with the Memory Machine via a 1950’s telephone in the gallery space. The sounds were heard via two 3 channel sound systems in the corridors leading into the exhibition space (above the historic reading room in the Great Court). The Memory Machine combined visitor memories with interviews with museum staff and collected an archive of more than 8000 contributions.