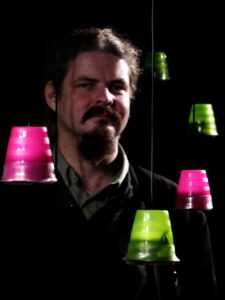 I am a composer and sound artist who has made work for numerous museums including the Science Museum, the National Maritime Museum and the British Museum. I work both as a solo artist and alongside other artists, in particular Madi Boyd.

Many of my early pieces are site-specific and deal in some way with evoking a sense of history, both in the choice of sound sources and their spatial composition. In particular, the multi-channel installation Boomtown (Oldham, 1998) spawned an interest in oral history which led to a number of collaborative projects with Cathy Lane, Memory Machine at the British Museum (2005), a co-edited edition of the journal Organised Sound on the theme of Sound, History and Memory, and a residency at Srishti College of Media in Bangalore.

More recently I became interested in the structural possibilities of spatial awareness and has developed navigable soundscapes using a variety of approaches including the use of locative media (GPS) in Scratch, a collaboration with BBC Radio Drama and members of the Lansdown Centre for Electronic Arts at Middlesex University in 2008. The installations The Exploded Sound (2012) and Significant Birds (2013) created as part of a period as research fellow at CRiSAP at LCC, University of the Arts London, allow listeners to explore the inner harmonic structure of sounds in space, playing with perception and illusion.

I have written concert works including a number featuring Balinese Gamelan alongside western instruments for the London Symphony Orchestra’s Community Gamelan as well as works for live musicians and electronics such as the site-specific musical game Ludus for 2 saxophone quartets, Dice and Colour Sensors (2009) for the Colourscape Festival. My work has been broadcast internationally including on BBC Radios 3 and 4, France Musique, CBC (Canada) and Hessischer Rundfunk Germany. As a performer I have played in many styles of music from classical piano to Balinese Gamelan to free improvisation, including appearances at the Spitz, Southbank Centre, MTV (Bjork unplugged).

I have also worked extensively with contemporary dance with pieces for Bedlam, Scottish Dance Theatre, Raphael Bonacela, Colin Poole and Charles Linehan among others.

I was programme leader for the MA in Sonic Art at Middlesex University between 2003 and 2011 and am currently Professor of Composition and Electronic Music at the Guildhall School of Music and Drama and Trinity Laban Conservatoire.