Details: The Playing the Bridge installation, commissioned by Hull City of Culture 2017, Creative Communities Programme, was the final stage in a larger project, of the same name, initiated by architect Jonathan McDowell of Matter Architecture, who designed the bridge, a pedestrian swing bridge over the river Hull. The project explored the notion of the bridge as a musical instrument, drawing on the Javanese Gamelan tradition and also included a series of Gamelan workshops, a new composition by myself, that used the bridge as a percussion instrument alongside western instruments. Documentation of the whole project can be seen below.

The installation was made in collaboration with Madi Boyd using manipulated images of the construction of the bridge, and ‘x-ray’ video of the mechanics of the swing mechanism and the water beneath. 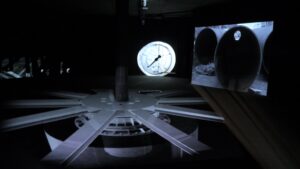 The sound was created from recordings from the Playing the Bridge workshops and fragments of interviews with construction workers who had been involved in the building of the bridge. On a personal level this project brought together a wide range of interests and practices that have previously been separate in my work including spectral decomposition and spatialisation of sound sources, devised performance, oral history and Gamelan.