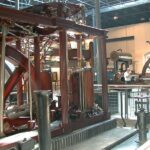 Grand Junction is an early acousmatic piece which had a number of performances in the 90s, most notably at a 50th anniversary concert for musique concrete in Paris in 1998 and a broadcast on France Musique to mark the the event. The piece did the usual acousmatic rounds, winning 2nd prize in the one off Barry Anderson/BBC competition, a mention at bourges, and various festival outings including Futura96, KlangArt97.
It is made entirely from sounds recorded at the Steam Museum in Kew and is a forerunner of my site-specific installation Living Steam.