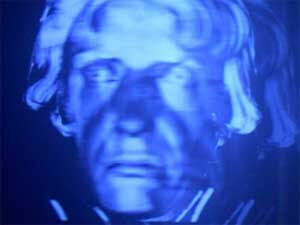 This was essentially a piece of museum sound design which also allowed me to experiment a bit with spatial structure. I worked with interactive designers Rom and Son to produce two pieces for a major exhibition on Nelson and Napoleon at the National Maritime Museum in Greenwich. The important part of the project from my point of view was the stairwell installation which was designed as a transitional space between a room focussing on Nelson\’s domestic life in rural England and a room on the floor below which looked at the Battle of Trafalgar. I used sound design to literally take the visitor out to sea, with different sounds on each level, so that at the top there was a church bell, birds and horses, and sea sounds from below could be heard in the distance. As you walked down toward those sounds the church bells were replaced by the tolling of navigation boyes and the birds by seagulls etc. For each sound at the top there were corresponding sounds lower down so that a musical narrative emerged for each visitor as they moved through the space.
The other part of the project consisted of a 5.1 Battle of Trafalgar interactive exhibit. The sound described the battle and you could watch ship movements projected onto a huge table and interact to find out more details about the ships involved.