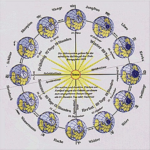 The Seasons is an hour long electronic work on a time honoured theme. It grew from a small seed, a seven minute piece entitled Summer at Giverny, which featured on the SPNM Short Cuts CD into a half hour dance piece for Charles Linehan and finally into its complete hour long form, which has had numerous complete performances particularly at various Colourscape festivals, Futura in Crest, France and York. It was broadcast in full by Hessischer Rundfunk and in part on Radio 3. The original intention was to get away from the wizz bang nature of much ‘acousmatic music’ and create something quite and meditative. This is most in evidence in Summer and Winter (from 15 mins and 45 mins) which are structurally identical. Spring and Autumn (0 and 30 mins) are retrogrades and (a little) more dynamic in character.