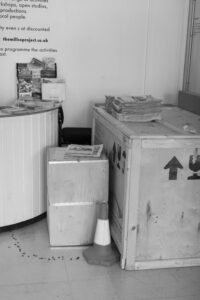 Jack was originally created in a pop up venue in the Highcross shopping Mall for the Make||Sound Festival. The venue, a former Virgin Media store, was transformed into an exhibition space for new sound works. It has also been shown at Curious, Rose Lipman Building, Hackney in 2016. This installation, while essentially humorous in intent, explores an idea I wrote about in the late nineties, the Anxious Sound Object. Drawing on Harold Rosenberg’s notion of the anxious object, and artwork so realistic it causes anxiety in the viewer. The anxious sound object uses a concealed sound source to similarly evoke a possible reality. ‘Jack’ looks like a load of old rubbish! In both instances I was able to find a location where there was some ambiguity as to whether this was part of the exhibition or not. The crate in the middle should be just large enough that a person might be inside. Instead it contains solenoid and a loudspeaker. A voice is heard, asking to be let out and a knocking from the solenoid completes the illusion!