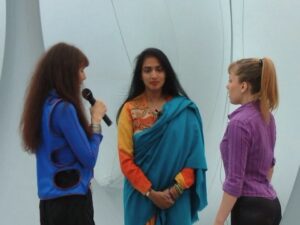 Triptych was commissioned in 2001 by the London Science Museum’s contemporary art programme and funded by the Wellcome trust. It consisted of a performance event held in the Who Am I gallery, in the then recently opened Wellcome Wing, for 3 live singers with eight channel electroacoustic sound. The brief was to explore the gallery’s theme of identity, which I tackled by using singers from different vocal traditions – Jessica Summers (classical soprano), Barbara Gaskin (popular vocalist) and Najma Akhtar (Indian vocalist). I wrote material which each interpreted according to their own traditions. The electroacoustic music merges and transforms their vocal identities while the presence of the live musicians in the space reasserted their individuality as they walked among the gallery visitors. The image is of a repeat performance given in the 2001 Colourscape festival. A stereo mix of the 8 channel electronic part is below: